Questions on the 1-year anniversary of the Alabama Media Group

Birmingham once had two daily newspapers. Today, it has none.

Owner Advance Publications turned the Birmingham News and its website al.com into two new companies, Alabama Media Group and Advance Central Services Alabama. It has followed through with similar plans in many of its other markets across the country.

One year ago today, the Birmingham News ceased daily publication after 124 years and began a thrice-weekly schedule. That same day saw similar transformations in Huntsville, Mobile and New Orleans, which has since gone back to publishing 6 days a week in two separate publications.

Circulation has dropped year to year. Site traffic has risen. Both companies have changed leadership.

And this week, Alabama Media Group announced plans to move in early 2014 to a leased location downtown; a previous report had indicated the company’s move was contingent on selling the facility, asking price $21.4 million. (No word on where sister company Advance Central Services will go.)

Before looking ahead to year two, let’s examine the key questions from the last 12 months under Alabama Media Group’s digital first strategy.

• As both companies’ leaders are replaced with those with no previous ties to Alabama, how will that affect the quality of local coverage?

• Have the journalists who replaced some of those fired in 2012 improved local coverage? Digital initiatives? Community interaction?

• What was the monthly advertising revenue in 2012 and 2013 for print ads, classifieds and online?

• Will Alabama Media Group be able to sell its current building at $21.4 million?

• Will a competing daily newspaper enter the Birmingham market, as has happened in at least two other Advance cities?

• And lastly, are we, the people of Birmingham, better off today with the Alabama Media Group than we were a year ago?

The Birmingham News turned 125 today. So obviously we had to have a giant cake.

The Birmingham News turned 125 in March. 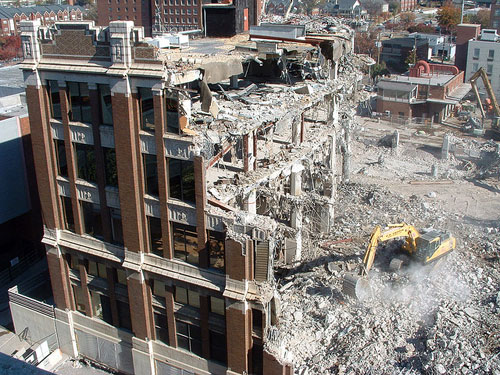 The demolition of the previous headquarters of
the Birmingham News in 2007, constructed in 1917.