Roy Hobbs, ABC 33/40’s weekend anchorman, is on temporary leave. The reason? A run-in with the law. Twice.

His first encounter, date unknown, was when a Birmingham police officer found him in Woodlawn with a prostitute, suspended driver’s license and no proof of insurance. Hobbs was let off with a warning.

The second encounter, Friday night, ended with an arrest. Police say they found Hobbs with crack and a crack pipe. He was charged with unlawful possession of a controlled substance and drug paraphernalia. The arrest report also indicates he was under the influence of drugs at the time.

He was released Saturday morning on $800 bond.

The station’s website removed him from the Talent Bios page, but has not removed his actual bio page. (Update: It has now been removed.) 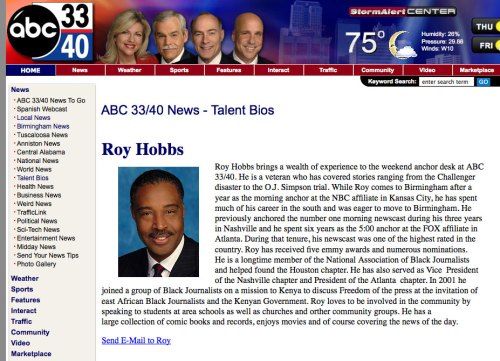 Roy Hobbs brings a wealth of experience to the weekend anchor desk at ABC 33/40. He is a veteran who has covered stories ranging from the Challenger disaster to the O.J. Simpson trial.

While Roy comes to Birmingham after a year as the morning anchor at the NBC affiliate in Kansas City, he has spent much of his career in the South and was eager to move to Birmingham. He previously anchored the No. 1  morning newscast during his three years in Nashville and he spent six years as the 5:00 anchor at the Fox affiliate in Atlanta. During that tenure, his newscast was one of the highest rated in the country.

Roy has received five Emmy Awards and numerous nominations.  He is a longtime member of the National Association of Black Journalists  and helped found the Houston chapter. He has also served as Vice President of the Nashville chapter and President of the Atlanta chapter.

Roy loves to be involved in the community by speaking to students at area schools as well as churches and other community groups. He has a large collection of comic books and records, enjoys movies and, of course, covering the news of the day.

This entry was posted in In the news and tagged ABC 33/40, crack, crime, drugs, news anchor, Roy Hobbs, television. Bookmark the permalink.