June 1: Times-Picayune employees fire off some 60 questions to their bosses about the coming changes. They even ask about an ad for Director of State News for the new Alabama Media Group, the editorial arm of the two newly formed companies.

June 2: An editor in Ann Arbor, Mich., had seen the Advance model in action for 3 years. She says it’s the wrong model for the Times-Picayune.

June 8: Editor of new media Kyle Whitmire rolls out an in-depth report for Weld for Birmingham. He theorizes that the Newhouse family, owners of Advance, are deliberately running the chain into the ground to squeeze out as much cash as possible. Two months later, Whitmire leaves his own company to join Alabama Media Group as a reporter.

"Every shred of substantive news on the Web about Birmingham originates in the Birmingham News." — @WKUChuckClark //Delusional or arrogant?

Bham News reporter on FB: "It looks like News will layoff ~107 people, incl. ~61 in newsroom. Very sad day for this paper & community."

June 12: The Birmingham News fires more than 100 employees, including 61 from the newsroom. Overall, Advance cuts some 400 jobs across its Alabama properties, including one at al.com and three at Birmingham Magazine (though managing editor Carla Jean Whitley would be rehired at the same position later in the summer). 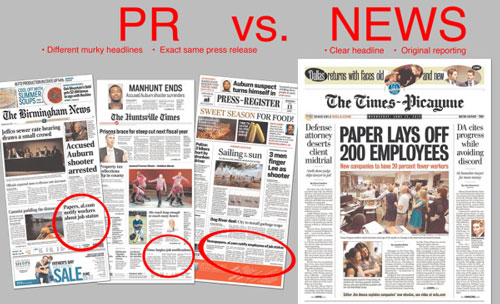 How Alabama newspapers covered their own layoffs
vs. the Times-Picayune.
[larger version]

June 13: All three Alabama newspapers use murky headlines to mask the massive layoffs (shown above).

“Advance Publications’ plans that have leaked out thus far seem to show a new approach with no assignment editors, little oversight and a system that will reward hype. Wonderful, huh?”

June 18: Al.com rolls out its new real-time commenting system. No longer are readers subjected to hundreds of hate-filled comments and taunts. (Just kidding.)

Bham News by the numbers. Reporters covering 8/28 municipal elections: 10. Of those, reporters left for 10/9 runoff: 1.

June 26: OregonLive.com is next in switching to the new site design, while the Oregonian escapes the thrice-weekly publishing plan.

June 29: The exodus of veteran reporters at the Times-Picayune is under way, one that has continued ever since.

July 3: The changes in New Orleans and Alabama fuels paranoia across the chain. To wit, this dustup over a NJ.com phantom job ad.

July 5: A look at how New Orleans’ “digital divide” will affect residents.

July 8: Times-Picayune reporter: “Everyone hates our website and is losing respect for us as a hard news leader.”

July 9: Jules Bentley launches an incredible six-part online series about “The Murder of the Times-Picayune.”

“Advance’s regional Web sites have generated traffic and have active forums, but they are a miserable place to consume news. Balky and ugly, with a digital revenue base below much of the rest of the industry, they seem like a shaky platform on which to build a business.”

Also, Digital First Media CEO John Paton admires the Times-Picayune thrice-weekly strategy. He loves it so much he copies it for one of his New York papers 6 months later.

July 19: The Huntsville Times leaves out an entire section because of an error on its third day of printing in Birmingham.

July 23: Competitors start lining up to take on the Times-Picayune.

ADVANCE CRISIS: No Saturday papers for high school football scores? al·com says this page is for you: http://t.co/YUVSHxFT

July 31: Kyle Whitmire leaves Weld for the Alabama Media Group, and Weld publisher Mark Kelly unleashes a “public excoriation.” Two more Weld writers (who had also worked with him at Birmingham Weekly) would soon join him at the new venture.

9 responses to “ADVANCE CRISIS: The insanely obsessive guide to the Birmingham News/al.com implosion”